udaya: விஜய் ஆசை நிறைவேறியது-எஸ்.ஏ.சந்திரசேகர்
Posted by udaya at 6:43 AM No comments: “Simpler a thing is, nobler it is”, said the legendary Sathyajith Ray. He would have reiterated his stance now had he watched Krishna (Vikram) in Deiva Thirumagal.
What would you call someone who is an embodiment of all things good, simple and virtuous but appears in the eyes of blemished materialistic world as aberrated? A Deiva Thirumagan, indeed!
DT is a poetical tale of love and affection between a dad and his 5 year old daughter who is the raison d’être of his life. He may be a mentally challenged person to the world but he is after all her dad.
Director Vijay’s caliber as an effective raconteur keeps escalating in every film of his and DT is the latest example. His matured handling of the script and his characters are just testimony to this. It is endearing to watch this tale unravel itself in a very charming and touching fashion.
There are no villains in DT but all the characters are driven by the goodness exuded by its lead Vikram. One of the first frames, where Krishna helps the pickpocket guy sums up his characterization. The subsequent shots of him abiding the traffic signal, wanting to stick to truth only and helping a hatchling to its nest lucidly spells forth his character. In a way, it is Vikram all the way…
What can you say about this actor whose sincerity and talents that are not already known? It is not Vikram you see but it is Krishna and a dad wanting to be with his daughter suffering the pangs of separation. He has done the tightrope walking of playing a mentally challenged person to the hilt. A little sway on any one side would have worked detrimental to him as an actor and the film. The seasoned actor that he is has given a brilliant performance.
Anushka looks ravishing and as a struggling lawyer gets her act right wanting to bring justice to her client. Santhanam’s comedy gels along with the story line and brings in enjoyable lighter moments. Nasser as the intelligent and cunning senior advocate Bhashyam is apt and delivers a veteran’s performance. However it is baby Sara who steals the show next only to Vikram in her angelic looks and performance. There is a serene look about her which helps the role majorly and her understanding of her dad and playing to his inadequacies warrant accolades. Amala Paul has a small role and delivers it right. The supporting casts of Y Gee Mahendra, Sachin Khedekar, Karthik Kumar, Krishna Kumar, Surekha, M R Kishore and Priya have also essayed their roles quite effectively. .
Setting the right kind of mood through his camera work has been cinematographer Nirav Shah’s forte which he has adhered to in DT. Nirav has had a field day in Vizhigalil Oru Vaanavil number which is aesthetics at its best. Anushka’s expressions in this sequence and the oblivious Vikram behind her on the bike are a revelation. The sleek and discreet editing helps the proceeding in a big way. G V Prakash’s scores are already chartbusters and each track adds significant value to the film. Ore oru oorukkula number is sure to be children’s favorite
Dialogues like “Vakil kitayum doctor kittayum poi pesa koodathu, aana vakillum doctorum poi pesalam” and ‘Saamikku amma kedayaada’ are noteworthy. There are quite a scenes that tug at your heart’s strings and almost all of them happen between the dad and the daughter, the cream being the one between them in the court room towards the end and that on the first day of Sara’s school where the duo communicate with each other in sign language.
On the flip side a few scenes involving M S Bhaskar and the helper don’t add value to the progress of the film. However considering the overwhelming positive feeling that the film evokes in its entirety, these foibles can be forgiven.
After a long while, DT gives the satisfaction of watching a film without cringing in your seats or worrying how it would appeal to the young population. In short Deiva Thirumagal is a well nuanced film that will appeal to everyone who has their heart and feelings in the right place.

Verdict: An emotional tale between a father and a daughter well told 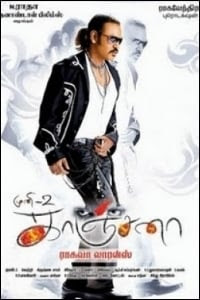 A sequel, not really! It is just the return of the character from the successful Muni. The original had managed to pack entertainment; spooks, fun and dance into an almost delectable capsule and the sequel looks at doing the same thing. So, is it more of the former or something that surpasses the precedent set by the original?
Kanchana is about a spirit and its thirst for vengeance; well, we all knew that, didn’t we. No surprises there. Raghava Lawrence reprises the role of the constantly terrified young man from Muni; we know what to expect here too. The novelty of seeing a hero as a coward wears off very soon because we have already seen it in Muni. But, Kanchana ends its similarities with Muni with these minimal points. All other aspects of the film are original. The plots of most scary films carry a flashback which details the reasons for the spirit lingering on in the world of humans even after death. It is this flashback which earns sympathy or wrath of the audience for the spirit and lends credence to the entire story of vengeance. Full credit to the makers of Kanchana for putting in substance and message into the flashback which takes the movie a notch above hotchpotch horror films. Much else about the plot cannot be revealed here because, being a suspenseful horror flick, they might really be spoilers for those who want to catch up with the film in theaters.
As is accepted in horror flicks; logical correctness of the central plot or credibility of the ghost/spirit’s acts through others are matters that should not be discussed, only experienced. And, Kanchana also demands that level of submission and acceptance from its viewers. First rule for a horror flick to strike it off with an audience is its ability to give the spooks; else it all ends up as a high and dry ride. Kanchana aces this rule; it does manage to give the chills and thrills wherever it intends to. The ‘experimental’ scene where Kovai Sarala and Devadarshini try to confirm the presence of a spirit in their midst is one of those instances. The good thing about the entire affair is that the horror or spook quotient is always maintained in good taste! What does that mean? The film does not contain any manipulative or artificial instances where deliberately positioned cameras, sudden shrieks and elaborate shots from behind a character create a sense of impending disaster. The director is honest with his audience. Yes, there are a few instances of old school horror, with graphics and weird forms appearing out of the blue, but it is strictly limited. But, it is not all about horror and spooks. There is a generous sprinkling of humor with Raghava Lawrence handling the portions. Lakshmi Rai seems to be around only for the glamour. The film looks sunny and cheerful in these portions, especially when he puts on his dancing shoes.
Horror films demand very convincing portrayals from the entire cast; everyone has to wear completely terrified and bewildered expressions for the excitement to get to the viewer. In that respect everyone has done a neat job. It is not too difficult for Lawrence, one would think, after having gone through the routine in Muni. But, the climax portions where he is possessed might have been physically demanding. Kovai Sarala repeats her mother act too and pulls it off with her abundant experience. Devadarshini too is more than just convincing with her portrayal. The ladies along with Lakshmi Rai have had to literally carry Raghava Lawrence throughout the movie which, while still being a result of spooky situations, does evoke a smile. Sriman does not have much to do and one cannot help but think that Lakshmi Rai is worth more than the part that she has got here, but that is what the script demands.
The surprise packet however is Sarath Kumar. Who would have thought that an actor known for his physique and action would pass off so well in the role of a transgender? What would have made him take up this role? Well, the only guess is that it is one character that does not conform to the long standing screen stereotype of transgenders; people who clap their hands in funny manners and ask for money from every second person. The film has shown them as people with immense self-respect and ideals while also pointing out that being a transgender is not a matter of choice but a congenital condition which cannot be helped. The director deserves a big round of applause for introducing this perspective.
The only let downs in the entire outing are the music by Thaman. While the songs pass muster, it is the BGM which fails to add spunk to the spooky scenes; more was expected from this promising young composer. The graphics too could have been better, but we understand the budget limitations.
Overall, Kanchana is a ride of spooks and chills, interspersed with moments of fun and dance. The good thing is that the spooks and chills have not been provided just for the heck of it; they look convincing and have an effect on the viewer. It may not be a classy piece of cinema, but it does manage to engage a viewer who is willing to give himself in to the central concept of the supernatural.